Join us 7–16 October, 2022 for our upcoming virtual antiquarian book fair!
Preregister now for Biblio.live and get $10 to use at the fair.
Home Book Collecting Guide What To Collect Children’s Literature by Writers and Educators of the Harlem Renaissance

Books transmit cultural values and can shape the views of society. Just as adults identify with certain characters and learn empathy from reading, children use books as a means of self-affirmation, and positive representation can be a strong building block in the life of a child.

In the early part of the 20th century, the popularity of books like Little Black Sambo by Helen Bannerman, Three Gollywogs by Enid Blyton, and Tintin in the Congo (1931) by Hergé, perpetrated harmful stereotypes of African-Americans and there was no counter-representation for young black children. The heroes in children’s books who were brave and smart and pretty were always white.

The questions that black intellectuals, writers, artists, and educators faced at this time were many. Can children keep an interest in reading if they don’t see themselves in what they’re reading? If the representation of people of color portrays a singular ugliness or stupidity, how will children of color grow to identify themselves, and how will other kids learn to value them?

During the Harlem Renaissance, a period which scholars loosely bracket as occurring between 1917 and 1937, many writers and educators aimed to counteract the harmful depictions in popular literature and provide higher ideals for children by creating literature that showed authentic representation and opportunity.

One of the earliest and most significant contributions to this area of literature was the ‘The Brownies Book.’ a printed monthly magazine from 1920-1922 in association with the NAACP’s Crisis Magazine. Headed by W.E.B. Dubois, Augustus Dill, and Jessie Redmon Fauset, The Brownies Book sought to inspire young children to do well in school, take pride in their appearance, and learn about their heritage. It also set the standard for other literature to follow. Many writers associated with the Harlem Renaissance and black literature contributed to the magazine including James Weldon Johnson and Langston Hughes.

Jessie Fauset, the literary editor of the Crisis Magazine from 1919-1926, wrote the dedicatory poem:

To Children, who with eager look

For History or Song or Story

That told of Colored Peoples’ glory,—

We dedicate The Brownies’ Book.

From 1925-1929, Effie Lee Newsome offered the ‘Little Page’ in the Crisis magazine, with a similar purpose to the Brownie Book. Newsome was the first famous African-American writer who wrote mainly children’s poems. She began her work with Crisis magazine in 1917, writing poetry aimed at showing children that black was beautiful, to showcase Black history, and to turn any hate in their hearts into compassion and love. Her one published volume of poetry was Gladiola Garden: Poems of Outdoors and Indoors for Second Grade Readers, published in 1940, and hard to find today. In 1999, Boyds Mills Press published Wonders, a collection of Newsome’s poems from Gladiola Garden, the Brownie Book, and the Crisis Magazine. 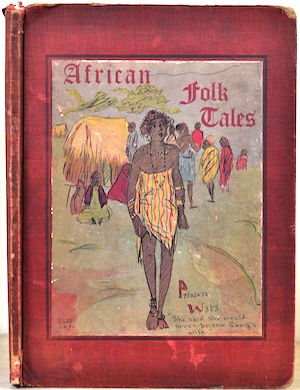 Newsome also illustrated African Folk Tales (1933), a collection by Pauline E. Dinkins. Pauline E. Dinkins was a children’s author, missionary, and physician, who was born December 30, 1892, in Marion, Alabama. She graduated from the Women’s College of Pennsylvania with her medical degree in 1919 before serving as a medical missionary in Africa, where she collected that tales that would be published in this volume for young people on African-American heritage.

Elizabeth Ross Haynes was an African American social worker, sociologist, and author. Born July 31, 1883, in Mount Willing, Alabama, she received her education at Fisk University before going to the University of Chicago for graduate school and receiving her MA from Columbia University in 1923. In 1921, she published Unsung Heroes, detailing African American lives and achievements, published by Du Bois and Dill in New York. In 1952 she published The Black Boy of Atlanta, a biography of Major Richard Robert Wright.

Wright was born into slavery in 1855 in Macon, Georgia, but went on to receive an education at multiple prominent institutions of higher education throughout his lifetime including Harvard, Columbia, the University of Chicago, Oxford University, and the University of Pennsylvania. He founded what is now known as Savannah State University and was a founding member of the intellectual organization, the American Negro Academy. He joined the army during the Spanish-American War and became a Major and the highest-ranking African-American during the war. After the war, he opened a bank in Philadelphia, the only African-American-owned bank in the North at the time.

Rose Leary Love was born in 1898 in the now-demolished Brooklyn neighborhood of Charlotte, NC. She was a teacher and writer who sought to encourage positive life experiences for young people through her writing, which focused a lot on the rural south. Nebraska and His Granny, published in 1936 by the Tuskegee Institute Press, is filled with folklore and traditions of Southern Black communities. Love died in 1969, but her memoir about growing up in Charlotte, Plum Thickets & Field Daisies, was published in 1996. 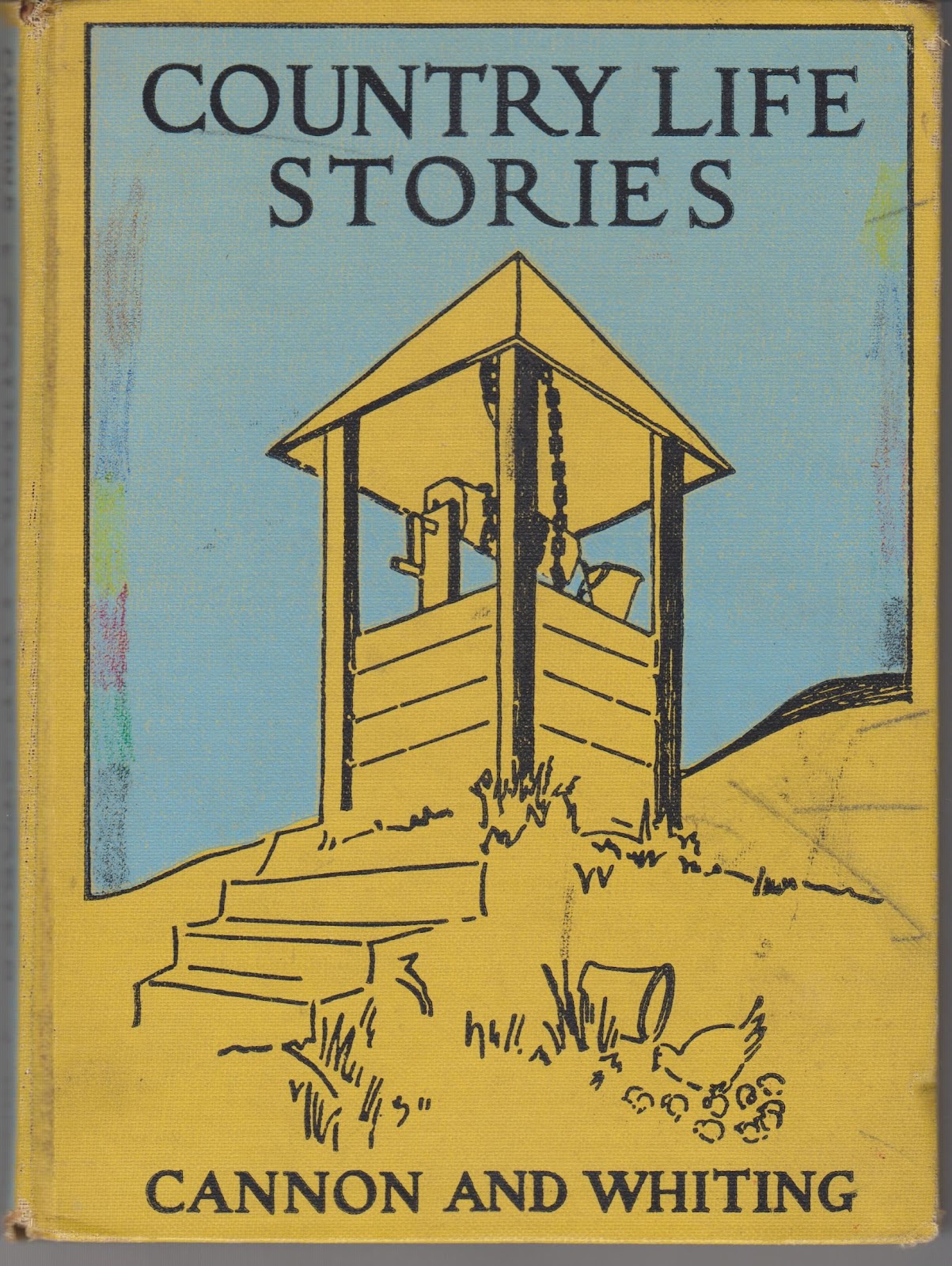 Written by two educators and focused on African Americans living in rural and farming communities, the introduction to Country Life Stories: Some Rural Community Helpers states “This book is intended to serve as a social studies reader for pupils on the elementary level in small rural schools. The stories are designed to help develop an appreciation for rural community helpers.” It was published by Dutton in 1938. Helen Adele Whiting, one of the authors, was a pioneer in progressive elementary education and the education of African American children, and also wrote Negro Folk Tales, for Pupils in the Primary Grades, published in 1938 as well, by Associated Publishers, Inc. 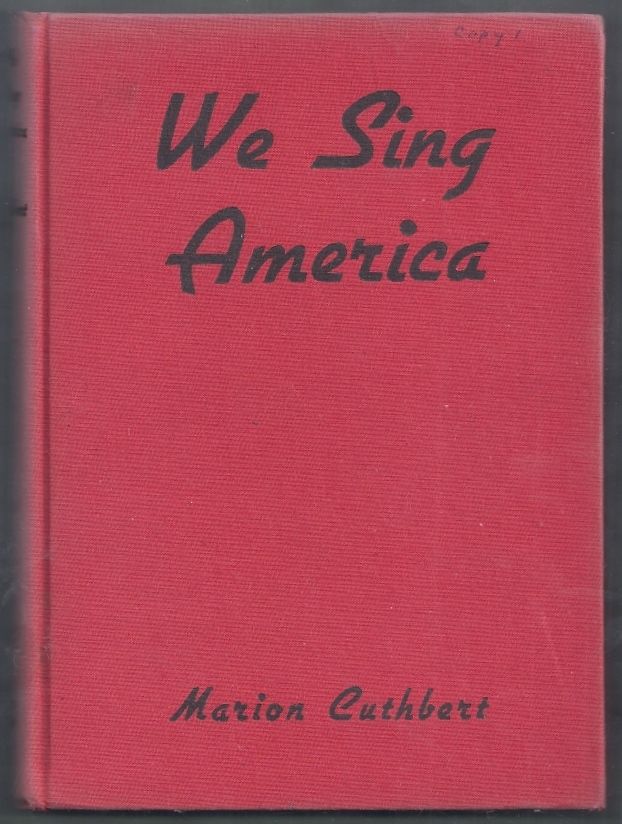 Marion Cuthbert was an intellectual and writer who served as an educator throughout her career. She received her Master’s and Doctorate degrees from Columbia College and went on to teach at Brooklyn College from 1944-1961, serving as the Dean of women. She authored numerous volumes of poetry, children’s stories, and short stories. We Sing America was geared toward a white or majority white classroom and introduced notable African-Americans, as well as pointing out the injustices of a racist society, including unequal schooling for Black children. 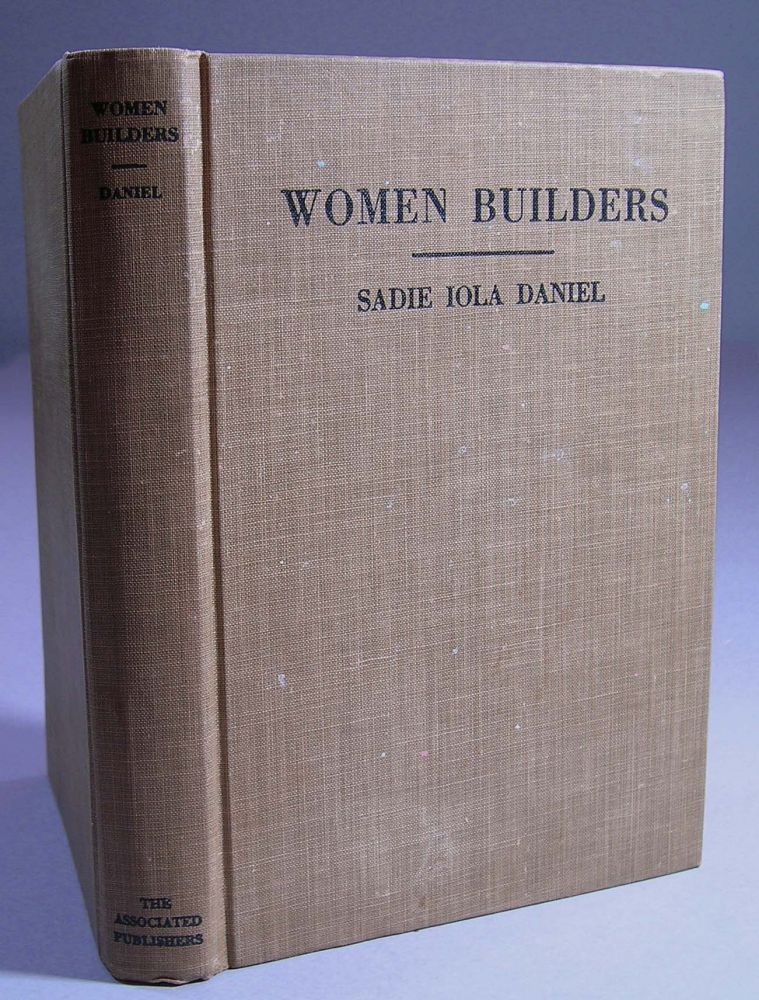 Sadie Iola Daniel acknowledges in the introduction of this book that children are geared toward ‘hero worship’ and this book seeks to satisfy that hunger with positive role models. She provides sketches of seven African-American women who contributed to the development of Black youth in the United States: Lucy Craft Laney, Maggie Lena Walker, Janie Porter Barrett, Mary McLeod Bethune, Nannie Helen Burroughs, Charlotte Hawkins Brown, and Jane Edna Hunter. 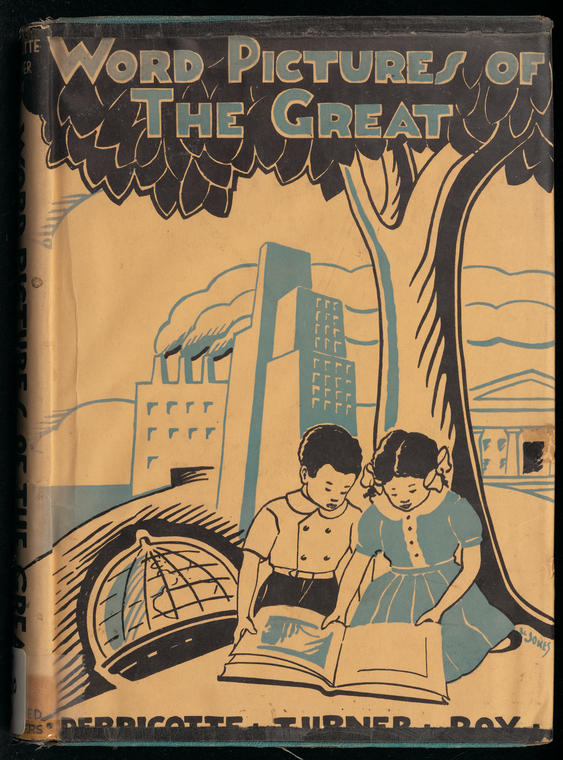 This book, put together by the Administrative Principal (Derricotte) and two teachers (Turner and Roy) from the George Bell Elementary School in Washington, D.C., stated in the preface: “The chief aim of child-training is higher-citizenship...We must keep lofty ideals before the youth of today, give him true history upon which to base his aspirations, and help him to think, feel, and work toward the fullest and the best that is in him.” Based on the idea that the “History of the world is the biography of great men,” these educators compiled brief biographies, written for children, of Black men and women who gained prominence in a variety of fields: Music, Literature, Art, Education, Science and Innovation, and Benefactors. It was re-published in 1964 as Word Pictures of Great Negroes. 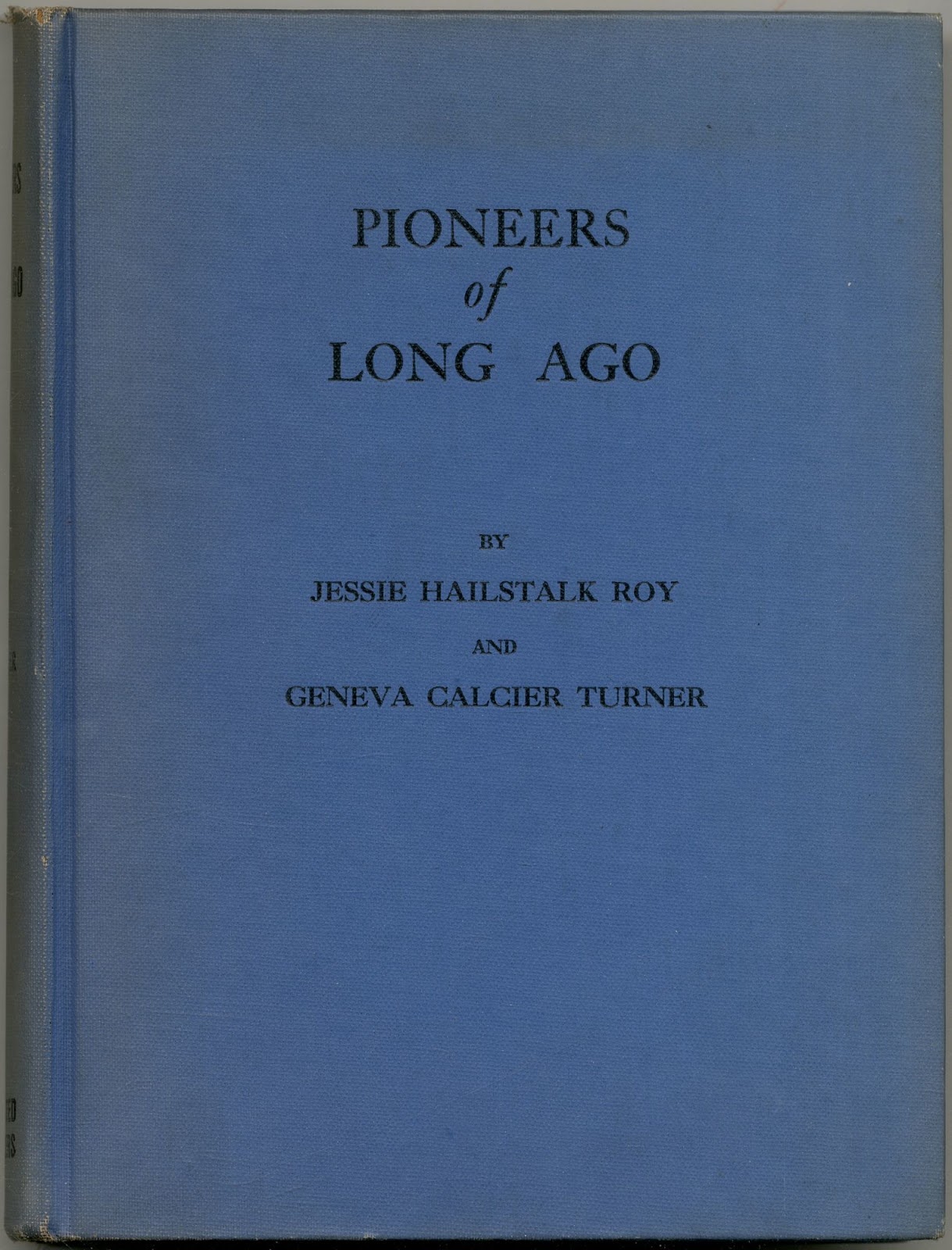 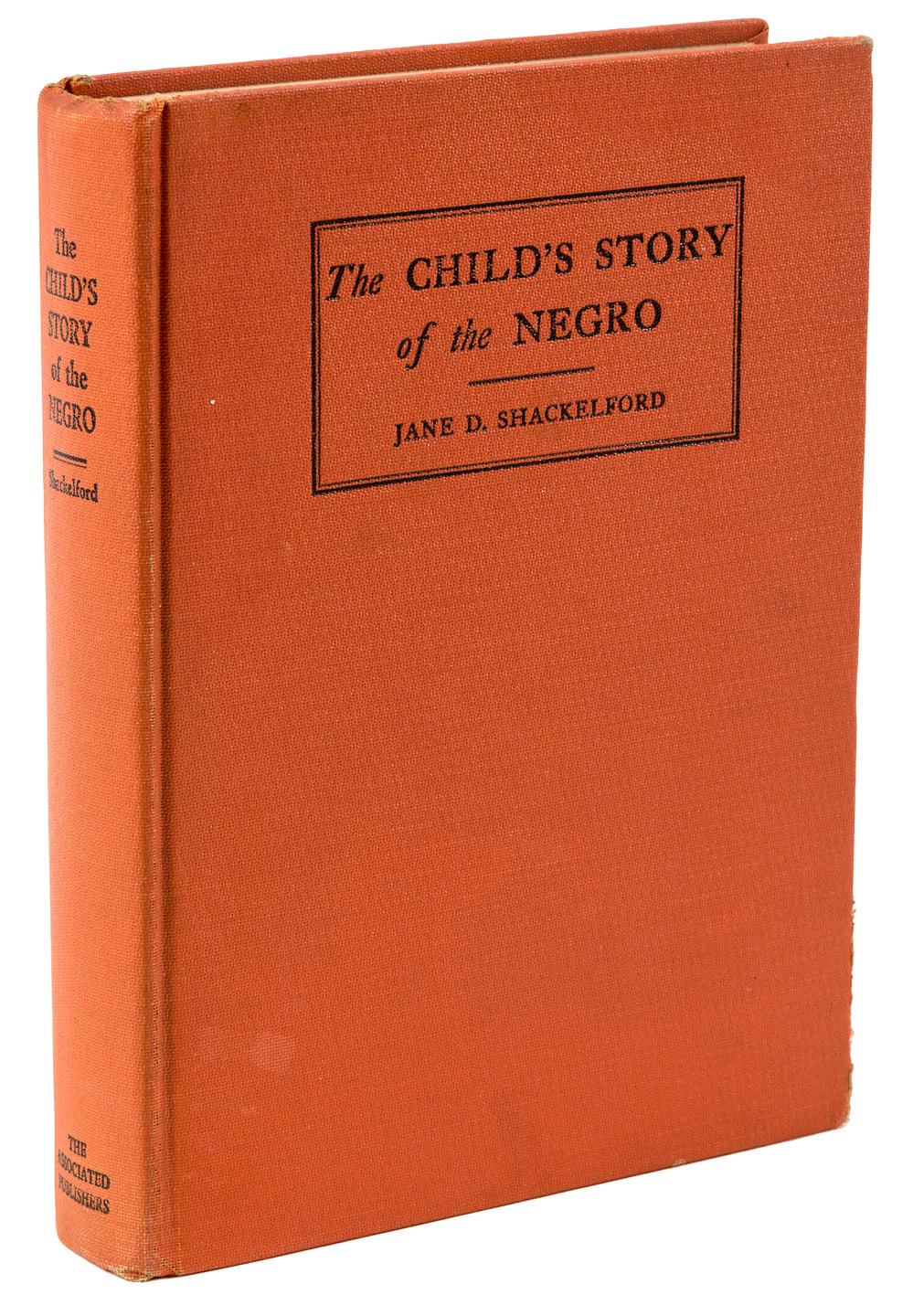 The introduction to The Child’s Story of the Negro, another written by an educator with the intention that it be used in the classroom, states: “In this reader, the author has endeavored to supply a long-felt need of both teachers and pupils of the elementary grades by putting into the hands of the elementary children an easy, interesting book that will help them appreciate the traditions, aspirations, and achievements of the Negro race.” 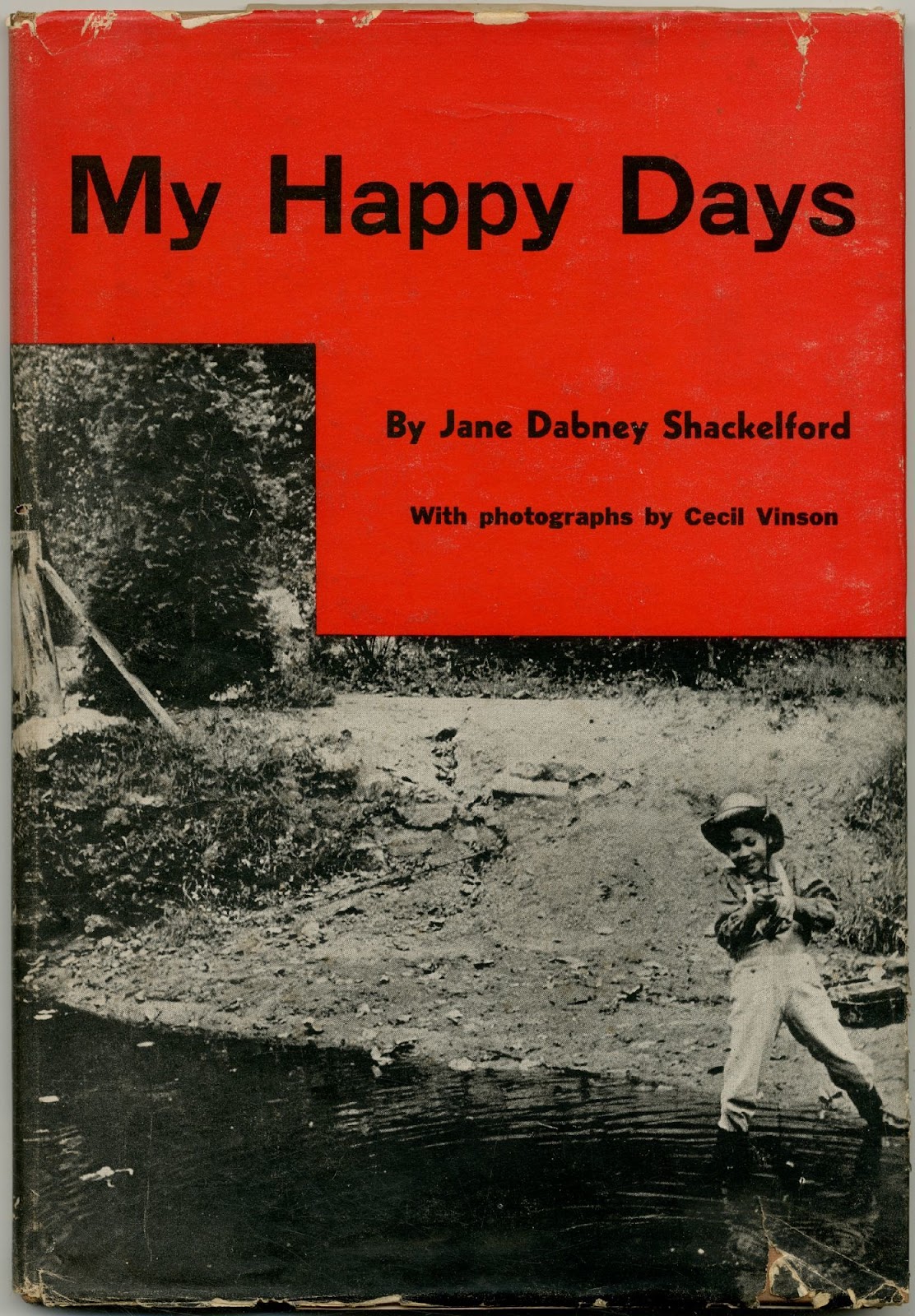 My Happy Days is a photographic children’s book the author created to represent the life of the average Black person and counteract harmful stereotypes that were pervasive in the culture at the time. Shackelford worked with the photographer Cecil Vinson to depict a modern Black middle class in which the children live in fashionable houses, get a good education, visit museums and play music just as the white children in literature at the time did. 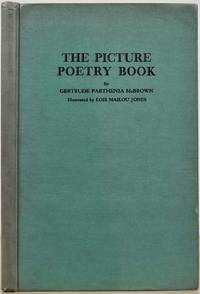 The poems in The Picture-Poetry Book are fun little poems for younger children, not centered specifically around race. The accompanying black and white illustrations do differ from other books at the time in that they depict Black children in the magical worlds of fairies and witches, and also doing everyday things like playing outside, sledding, watching the snow, and having tea parties. The author explains in the introduction that the book is intended to “satisfy the child’s play instinct and at the same time cultivate an appreciation for poetry, thereby stimulating the imagination and developing a sense of beauty and power.”

Children’s Literature of the Harlem Renaissance by Katharine Capshaw Smith