Join us 7–16 October, 2022 for our upcoming virtual antiquarian book fair!
Preregister now for Biblio.live and get $10 to use at the fair.
Home Rare Books Antique & Collectible Books More rare books from Attic Books Report on the Scientific Results of the Voyage of H.M.S. Challenger during the Years 1873-76 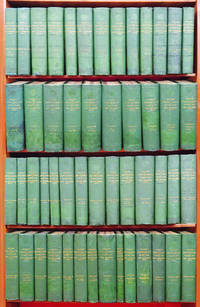 Report on the Scientific Results of the Voyage of H.M.S. Challenger during the Years 1873-76

Report on the Scientific Results of the Voyage of H.M.S. Challenger during the Years 1873-76

Her Majesty's Government, 1882-95. First Edition. Hardcover. Very good +. The number of copies printed was not large and most copies went to institutional libraries during the 19-year publication period. Many existing sets are incomplete. Fifty 33-cm hardcover volumes with various paginations in the original green publishers cloth. Narrative  2 vols. in 3 books; Zoology  32 vols. in 40 books; Botany  2 vols.; Physics and Chemistry  2 vols.; Deep Sea Deposits  1 vol.; Summary  2 vols. (41 vols. in 50 books). Over 4,000 illustrations, including 2522 lithographic plates (some colour or partial colour, some double page or folding), 37 photographs, 594 in-text figures, 4 fold-out charts in pockets, over 500 charts and maps, over 350 small woodcuts or decorations, and numerous tables. Illustration highlights include 30 gorgeous colour bird plates in Zoology Vol. II, human crania in Zoology Vol. X, octopi in Zoology Vol. XVI, seals in Zoology Vol. XXVI. Narrative Vol. I First and Second Parts have 35 b&w photographic plates with a fold-out frontispiece photo in each. Professional repairs to cloth. Some minor stains to exterior. Plates removed from front pastedowns but presentation plates for John Murray of Edinburgh and Her Majestys Government remain. Library call numbers in pen on verso of title pages. Occasional small tears, chips, thumbing, and dampstains. Pages in some sections uncut and in some sections paper brown and brittle. Overall a lovely, complete set of a publication usually subject to hard use and depredations of print collectors. Complete set weights 200 kg. Presented to London (Ontario) Mechanics Institute by John Murray and later by Her Majestys Government. John Murray was born in Canada and educated in London, Ontario.

Title continues: "under the command of Captain George S. Nares, R.N., F.R.S. and the Late Captain Frank Tourle Thomson, R.N. Prepared under the Superintendence of the Late Sir C. Wyville Thomson, Knt., F.R.S., &c. Regius Professor of Natural History in the University of Edinburgh, Director of the Civilian Scientific Staff on Board and Now of John Murray, LL.D., Ph.D., &c., one of the Naturalists of the Expedition. The most comprehensive series of scientific voyage reports ever published, the Report on the Scientific Results of the Voyage of the H.M.S. Challenger is extremely scarce as a complete 50-volume set. Considered second only to Darwins voyage aboard the Beagle for its contributions to 19th century science, the voyage of the Challenger founded the scientific discipline of oceanography. Naturalist Sir John Murray referred to the publication as the greatest advance in the knowledge of our planet since the celebrated discoveries of the fifteenth and sixteenth centuries. HMS Challenger left Portsmouth on Dec. 21 1872 and returned to Spithead, Hampshire on May 24, 1876 having spent 713 days at sea out of the intervening 1,250. Its voyage proceeded around the world by way of South Africa, Australasia, Antarctica, East Asia, Hawaii, and South America, making it the most important 19th century circumnavigation of the globe. A joint venture of the Royal Society and the British Admiralty, the goals were: *to investigate the physical conditions of the deep sea in the great ocean basins, including depth, temperature, circulation, specific gravity and penetration of light. *to determine the chemical composition of seawater at various depths from the surface to the bottom as well as the organic matter in solution and the particles in suspension. *to ascertain the physical and chemical character of deep-sea deposits and the sources of the deposits. *to investigate the distribution of organic life at different depths and on the sea floor. The expeditions scientists were directed by Scottish Professor Charles Wyville Thomson (1830-1882), natural historian and marine zoologist who served as chief naturalist on board. Wyville Thompson died of exhaustion and stress during the preparation of the reports and the publication was afterwards supervised by his assistant, Canadian-born Sir John Murray (1841-1914) who was educated in our very own London, Ontario. As a pioneering oceanographer, marine biologist and limnologist, Murray is considered to be the father of modern oceanography. Seven of the volumes were written mostly or entirely by Murray. Admitted into the Royal Society as a Fellow in 1896, Murray received further commendation by the British government in 1898 when Queen Victoria granted the rank of KCB in recognition of his outstanding contributions to marine science. Other expedition scientists: John Young Buchanan (1844-1925), the expeditions official chemist; Henry Nottidge Moseley (1844-1891) who studied invertebrate biology; Rudolf von Willemoes-Suhm (1847-1875), German naturalist who studied the crustaceans the voyage discovered, died en route from Hawaii to Tahiti and was buried at sea. The official expedition artist was John James Wild (1824-1900), a Swiss-born natural history illustrator who also acted as the expeditions secretary. The ships 23 officers and 240 bluejackets were led by Captain George Strong Nares, highly thought of as a leader and explorer. During their four-year mission, the men of the Challenger circumnavigated the globe, travelling 68,890 nautical miles (127,580 km) across the Atlantic, Pacific and Antarctic oceans. They sounded the ocean bottom to a depth of 26,850 feet (8,183.88 m), discovered 715 new genera and 4,717 new species of ocean life, many of which were creatures thought at that time to be mythical. In addition, they conducted 492 deep sea soundings, 133 bottom dredges, 151 open water trawls and 263 water temperature observations. The ship collected data and samples at 362 stations scattered over 14 million square miles (36,259,833 square km) of ocean floo r.The expeditions zoology findings make up the bulk of the report. Many of their specimens were displayed in the British Natural History Museum and are still looked at by researchers today. The report includes observations on faunae of countries visited, with the gorgeous highlight being Birds by P. L. Sclater with 30-hand coloured plates. Other papers include: Bones of Cetacea, by W. Turner; Human Skeletons, by William Turner; Collections of Eggs, by P. L. Sclater; Essay on the Green Turtle, by W. K. Parker; Essays on Shore Fishes and Deep Sea Fishes, both by A. Gunther; and Deep-Sea Fauna of New Zealand, by A. Hamilton. Narrative Volume I, First and Second Parts, include photographs taken by a series of photographers that include the earliest known photographs of Antarctic icebergs. Although the Challenger sailed close to Antarctica, allowing the men to view icebergs, pack ice and whales, they did not go within sight of the actual continent. The Challenger was a three-masted, square-rigged, steam-assisted 200 ft. (61 m) long wooden corvette from the Royal Navy, built 1858 as a hybrid of the eras of sail and steam. It was the first vessel specifically equipped for oceanographic research, most of its guns being removed to make way for scientific laboratories, work rooms and storage space for samples collected. Some of the ships equipment was invented or specially modified just for the expedition. This 50-volume set, containing almost 30,000 pages, took 19 years, until 1895, to publish in entirety. Specimens brought back were distributed to the worlds foremost experts for examination, which greatly increased the expense and time required to finish the report. Most sets went to libraries or other institutions. Oceanography is increasingly relevant as global warming affects sea levels, coastlines, ocean acidification, sea currents, surface temperatures, tides, the sea floor, and weather. Studying climate change requires a foundation which the report of the Challenger provides in abundance, being the first attempt to explore the ocean depths beyond a few fathoms.

30 day return guarantee, with full refund including original shipping costs for up to 30 days after delivery if an item arrives misdescribed or damaged.

Seller rating:
This seller has earned a 5 of 5 Stars rating from Biblio customers.
Biblio member since 2011
London, Ontario
Ask Seller a Question

Attic Books is one of the premier retail locations for antiquarian and collectable books in Canada. We recently celebrated our thirtieth year in business. Please browse our select online stock on a wide range of subjects in books and paper collectables for the reader, scholar and the seasoned collector. Or come visit us in London, Ontario to enjoy the relaxed atmosphere of our three floor bookstore, enhanced by original tin ceilings, hardwood maple floors, and the arts & crafts faade of our century building.

Cloth
"Cloth-bound" generally refers to a hardcover book with cloth covering the outside of the book covers. The cloth is stretched... [More]
First Edition
In book collecting, the first edition is the earliest published form of a book. A book may have more than one first edition in... [More]
New
A new book is a book previously not circulated to a buyer. Although a new book is typically free of any faults or defects, "new"... [More]
verso
The page bound on the left side of a book, opposite to the recto page.

Bern Marcowitz warns against paperclips and other inappropriate page-savers, and offers a bit of advice on using and collecting bookmarks.

Collecting History of the Circus in America

Step right up! Take a look at the center ring, where you will see displayed the most amazing, most colorful series of history books that the world has ever seen! Right this way, folks…