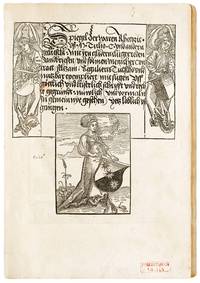 Freiburg im Breisgau: Friedrich Riederer, 11 December 1493. – First edition.
The first complete rhetoric in German.
Friedrich Ried(e)rer's (c. 1450-c. 1510) work has to be esteemed as a landmark in the domain of rhetoric. Comprising ars rhetorica, ars dictandi and ars notaria, Riederer's book was intended for the most important fields of communication in his time, where rhetorical knowledge was used: chancery writers, notary's and other offices, scholarly research and teaching, preaching, municipal judicature and administration. The text is extensively treating the classical rhetorical theory including translations of parts of Cicero's De inventione and other texts. Moreover, it contains also detailed manuals on epistles and on legal contracts, providing a number of models.
Riederer was an interesting and erudite character, both active as a humanist writer and a printer. He ran the second printing press at Freiburg im Breisgau and this is his first dated book. It was very successful and was reprinted in Strasbourg in 1505, 1509, 1517, and again in Augsburg, 1535. Riederer apparently specialised on rhetorical and poetical works, including a Latin tract by his contemporary Jakob Locher Epitoma Rhetorices (1496).
The illustrations in this edition are regarded as the first woodcuts printed in Freiburg. The xylographic title shows artistic resemblances to Schongauer's and Dürer's works. The calligraphic script of the heading is flanked by two angels holding the coats of arms of the rulers of Friedingen and those of Steckborn (both near Lake Constance). Beneath is another fine woodcut with an elegant lady holding the armorial device of the author/printer, which reappears on the last leaf. This illustration has often been related to a drawing by Dürer, today in Bayonne (Musée Bonnat), representing a young woman in a fashionable dress. The woodcut was even thought to have been designed by the young Albrecht Dürer, withdrawn, however, by more recent research.
The full-page woodcut on the verso of fol. a1 shows an allegorical scene: The young lady Rhetorica offers brilliant eloquence in form of a radiant mirror that looks like a sun or a star to a king at his court. This illustration is signed with the initials MM, once suggested as a work by the artist Matthes Maler from Erfurt (Nagler, no. 1999). This theory was dismissed as Matthes is not testified before 1511 and neither his style nor his monogram resembles the present woodcut.
The illustration on leaf k5 showing Daedalus and Icarus is regarded the first printed representation of a flying human. It is not clear, however, whether this motive was exclusively designed for Riederer's Spiegel, or if it stemmed from another edition, as for example Ovid's Metamorphoses. Nevertheless the author incorporates the image in his argumentation when he points out that the writer should use his words considerately, like Daedalus who avoided flying too high or too low. Those who are boisterous and overexcited will soon lose their reader's respect and attention.

7 day return guarantee, with full refund for up to 7 days after delivery if an item arrives misdescribed.
The seller will bear the shipping costs. The buyer bears the responsibility of paying local sales taxes and customs duties.

Seller rating:
This seller has earned a 5 of 5 Stars rating from Biblio customers.
Biblio member since 2019
Basel
Ask Seller a Question

Dr. Jörn Günther's passion for medieval books and manuscripts predates the establishment of his art dealership in 1990. With a team of specialists at the helm, Dr. Jörn Günther Rare Books provides scholarly services, expert advice, long-term support on the development of collections, and the acquisition and sale of manuscripts, miniatures, and rare early printed books from the Middle Ages and the Renaissance.After a lifetime of bibliophile and 40 years of scholarly pursuit, Dr. Jörn Günther has earned a reputation as one of the world's foremost specialists and voices of authority in his field. He has been instrumental in the composition of some of the best collections worldwide, and has worked with leading international museums and institutions, such as New York's Metropolitan Museum of Art and the J. Paul Getty Museum in Los Angeles, and alongside private collectors on a quest to create and develop their own collections.

device
Especially for older books, a printer's device refers to an identifying mark, also sometimes called a printer's mark, on the... [More]
calf
Calf or calf hide is a common form of leather binding. Calf binding is naturally a light brown but there are ways to treat the... [More]
raised band(s)
Raised bands refer to the ridges that protrude slightly from the spine on leather bound books. The bands are created in the... [More]
First Edition
In book collecting, the first edition is the earliest published form of a book. A book may have more than one first edition in... [More]
fine
A book in fine condition exhibits no flaws. A fine condition book closely approaches As New condition, but may lack the... [More]
leaves
Very generally, "leaves" refers to the pages of a book, as in the common phrase, "loose-leaf pages." A leaf is a single sheet... [More]
verso
The page bound on the left side of a book, opposite to the recto page.
spine
The outer portion of a book which covers the actual binding. The spine usually faces outward when a book is placed on a shelf.... [More]
cracked
In reference to a hinge or a book's binding, means that the glue which holds the opposing leaves has allowed them to separate,... [More]

Wondering how to take care of the leather books in your collection? Renowned book care expert Bern Marcowitz explains how and when to clean and repair leather books.

Is your family bible valuable?

While they may have sentimental value, bibles passed down through the family are not often worth a lot of money. Learn more...