Join us 7–16 October, 2022 for our upcoming virtual antiquarian book fair!
Preregister now for Biblio.live and get $10 to use at the fair.
Home Book Collecting Illustrators Edmund Dulac 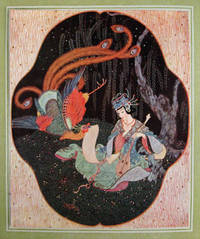 Edmund Dulac (1882-1953) was one of the great figures from the Golden Age of Illustration. Born in Toulouse, France, Dulac showed artistic talent in his early teens. Many of these efforts were in watercolor, a medium he would favor through most of his life. Dulac studied studied law at the University of Toulouse, and then, after becoming bored with law and having won an award at the école des Beaux-Arts, decided to study art full-time instead. A scholarship took him to Paris and the Académie Julien where he stayed for three weeks. In 1904, he left for London and at the age of 22, he was commissioned by J.M. Dent to illustrate Jane Eyre (1905).

Dulac was soon after associated with Leicester Gallery, who commissioned and sold Dulac’s paintings, the rights of which were then purchased by Hodder & Stoughton, who used the pieces as illustrated books, publishing one book a year. Productions from this arrangement include Stories from The Arabian Nights (1907) with 50 color images, an edition of William Shakespeare’s The Tempest (1908) with 40 color illustrations, The Rubaiyat of Omar Khayyam (1909) with 20 color images, The Sleeping Beauty and Other Fairy Tales (1910), Stories from Hans Christian Andersen (1911), The Bells and Other Poems by Edgar Allen Poe (1912) with 28 color images as well as many monotone illustrations, and Princess Badoura (1913). Hodder and Stoughton also published The Dreamer of Dreams (1915) with 6 color images - a work composed by the Queen of Romania.

With the 1914 publication of Sinbad the Sailor and Other Stories from the Arabian Nights, Dulac developed what would become a permanent change in his artistic approach - a more oriental style with a brighter palette. During the first World War, Dulac contributed relief books, including King Albert’s Book (1914) and Princess Mary’s Gift Book as well as his own Edmund Dulac’s Picture-Book for the French Red Cross (1915) including 20 color images. After World War I ended, demand for illustrated deluxe books declined. Dulac’s last such books were Edmund Dulac’s Fairy Book (1916), the Tanglewood Tales (1918) with 14 color images, and the The Kingdom of the Pearl (1920). And thus, with the end of the Golden Age of Illustration, Dulac moved into other areas of design including newspaper caricatures for The Outlook, portraiture, theatre costume and set design, bookplates, chocolate boxes, medals, stamp designs for Britain, and other various graphics.

Dulac also began producing a series of cover paintings around an agreed-upon theme for The American Weekly, a Sunday supplement of the Hearst newspaper chain in America. The first series, Bible Scenes and Heroes started in October of 1924 and ran for twelve installments. He would return again and again to this market as his primary source of income until 1949. Dulac also produced illustrations for Britain’s Country Life. Country Life Limited (London) published Gods and Mortal in Love (1935) with nine color images and The Daughter of the Stars (1939) with two color images. Halfway through his final book commission, illustrating Milton’s Comus, Edmund Dulac died of his third heart attack in 1953 at age 70.