Join us 7–16 October, 2022 for our upcoming virtual antiquarian book fair!
Preregister now for Biblio.live and get $10 to use at the fair.
Home Book Collecting Publishers A. L. Burt 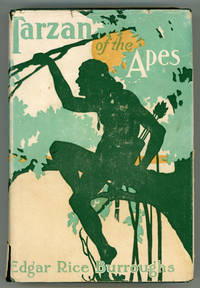 Albert L. Burt’s first venture into the publishing world was his sale of a small edition of the National Standard Dictionary while working as a travelling salesman. Using a tactic heavily dependent on the power of suggestion, Burt was able to essentially sell the dictionary as a companion book to various manuals and reference books, and was extremely successful in doing so. In 1889, he decided to sell affordable cloth-bound literary classics and fiction standards of the day. The next year, he officially began the publishing as A.L. Burt Company, which was fully incorporated in 1902.

While the company did occasionally offer first editions of new works (including the first US edition of P. G. Wodehouse’s Man with Two Left Feet), Burt’s niche in publishing proved to be the reprint business. In 1915, with hopes of expanding, Burt began buying reprint rights from other publishing houses, including A. C. McClurg, Appleton-Century, Bobbs-Merrill, Doubleday-Doran, and Little, Brown. The new endeavor increased revenue as well as clientele, affording the company to publish dozens of already well-received fiction titles — from the historical adventures of Alexandre Dumas to the mysteries of Sir Arthur Conan-Doyle. Originally issued by A.C. McClurg, Burt reprinted the first five novels of the popular Tarzan series until Grosset & Dunlap acquired the contract in 1928. As a result, copies from the first printing of A.L. Burt’s edition of Tarzan of the Apes, the first novel in the series, are notably sought after by collectors.

Upon Albert L. Burt’s death in 1913, the company was left to his three sons, Harry, Frederic, and Edward. It was later sold to Blue Ribbon Books in 1937. When Doubleday later bought out Blue Ribbon Books, Random House acquired Burt’s Home Library Series.

First editions of A.L. Burt reprints have a sequence of numbers with “1” present on the copyright page.