Join us 7–16 October, 2022 for our upcoming virtual antiquarian book fair!
Preregister now for Biblio.live and get $10 to use at the fair.
Home Book Collecting Publishers Ace Books 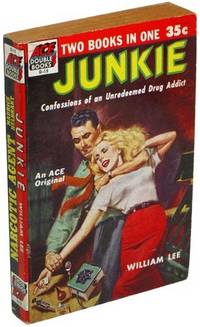 Ace Books, oldest continuously operating science fiction publisher in the United States, originally got its start as a genre publisher of mysteries and westerns. The first book published by Ace, which was founded by Aaron A. Wyn in 1952, was a pair of mysteries bound tête-bêche: Keith Vining’s Too Hot for Hell, backed with Samuel W. Taylor’s The Grinning Gismo, priced at 35 cents, with serial number D-01. The second title was a western (also tête-bêche): William Colt MacDonald’s Bad Man’s Return, bound with J. Edward Leithead’s Bloody Hoofs. However, by the next year, Ace’s first science fiction venture, A.E. van Vogt’s The World of Null-A, bound with his The Universe Maker, was published. By 1955, Ace Books, released more science fiction titles each year than in either of the other two genres, and from 1961 onward, science fiction titles outnumbered mysteries and westerns combined.

Though Ace did not create the tête-bêche format containing two short novels bound together, the publisher is responsible for the increased popularity of the style — Ace Doubles, as they came to be known. The “innovative” marketing technique bound books by established authors with those by lesser-known writers on the premise that this would help new writers gain readers. Ace published hundreds of titles as Ace Doubles over the next twenty-one years. Some important titles in the early Doubles series (D-series) include D-15, which features William S. Burroughs’s first novel, Junkie (written under the pseudonym “William Lee.”)

Soon after the van Vogt Double came the first Ace title not in tête-bêche format: Dorothy Malone’s Cookbook for Beginners. Indeed, in 1954, singles novels — mostly books outside of Ace’s three main genres — began appearing frequently and by the 1960s, the core genres were also published as singles.

In 1965, Wollheim challenged the copyright protection of the American edition of J. R. R. Tolkien’s The Lord of the Rings. As a result, Ace Books published the first-ever paperback edition of The Lord of the Rings, featuring cover art and hand-drawn title pages by Jack Gaughan. After considerable controversy (including Tolkien’s siding with Ballantine/ Houghton Mifflin over Ace), Ace agreed to pay royalties to Tolkien and let its still-popular edition go out of print.

Many of Ace’s science fiction and fantasy titles have become classics over the last 60 years, such as Frank Herbert’s bestselling Dune series, T.H. White’s Arthurian novel The Once and Future King, Robert A. Heinlein’s Stranger in a Strange Land, and William Gibson’s breakout book Neuromancer, which is credited with introducing the concept of cyberspace. Today, Ace continues to publish some of the greatest up-and-coming and classic writers of its genres, including Charlaine Harris, whose #1 New York Times bestselling Sookie Stackhouse series was the basis for HBO’s hit show “True Blood;” classic science fiction authors like Joe Haldeman, John Varley, and Jack McDevitt, all of whom have been with the imprint for decades; and award winners Charles Stross, Alastair Reynolds, and Stephen Baxter.

The Ace Doubles (bound tête-bêche) were issued until 1973 and have proven attractive to book collectors as well. Rare titles in mint condition command prices upwards of $1,000.