Join us 7–16 October, 2022 for our upcoming virtual antiquarian book fair!
Preregister now for Biblio.live and get $10 to use at the fair.
Home Book Collecting Publishers Bobbs-Merrill 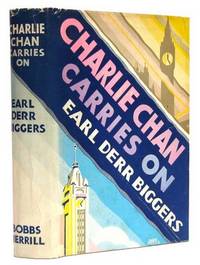 In 1850, Samuel Merrill bought an Indianapolis bookstore and entered the publishing business, intially focusing on law books. After Merrill’s death five years later, his son Samuel Merrill, Jr. continued the business. Merrill Jr. guided the company through a series of business partners and name changes, including Merrill Meigs and Company, and the Bowen-Merrill Company. In 1903, the name became the Bobbs-Merrill Company, after long-time director, William Conrad Bobbs. Around this time, Bobbs-Merrill, a small, local press, was transformed to a national publishing powerhouse, printing the likes of L. Frank Baum’s The Wonderful Wizard of Oz and its many sequels. By 1908, the company grew to include educational publishing, printing history textbooks and its biggest commercial success, The Joy of Cooking. In 1959, Bobbs-Merrill was bought by another firm which was, in turn, absorbed by Macmillan Publishing in the 1985. The Bobbs-Merrill name was no longer used with the exception of continued sales of the Fifth Revision of The Joy of Cooking, which continued to be a steady seller for Macmillan.