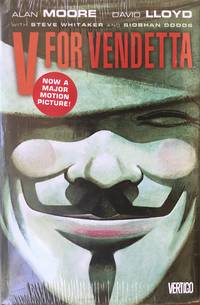 Vertigo Comics was an imprint of the American publishing company DC Comics. Launched in 1993, Vertigo was created to be a home for DC’s more mature content. It was announced in June 2019 that Vertigo would be discontinued in January 2020 as DC restructures to consolidate their offerings under one brand name.

Vertigo allowed DC to publish stories with graphic or adult content that was not approved by the Comics Code Authority, including explicit violence, substance abuse, sexuality, nudity, profanity, and other controversial subjects.

The powerhouse behind Vertigo was Karen Berger, a former literature and art-history student, who joined DC Comics in 1979 and stewarded the imprint from 1993-2012.

During its 27 year run, Vertigo produced a number of groundbreaking comics and graphic novel series because they took risks on unconventional stories like V for Vendetta by Alan Moore and David Lloyd, Warren Ellis and Darick Robertson’s Transmetropolitan, and Bill Willingham’s Fables. Some Vertigo series won the Eisner Award, including the “best continuing series” of various years. That list includes The Sandman, Preacher, 100 Bullets, Y: The Last Man and Fables. Several Vertigo publications have been adapted to film and television, including Constantine, A History of Violence, Stardust, V for Vendetta, iZombie, Lucifer, and Preacher.

The financial success of many Vertigo titles is credited to the “trade paperback” editions that include monthly comics bound into a volume. These paperback editions were not only in comic shops, but in all bookshops, and their brisk sales led to the trade paperback collection becoming a standard format in the American comics industry.

While Vertigo Comics has seen its end, fans can still find many of their favorite dark tales continuing to be published under the banner of DC Black Label.

Being produced by a large number of artists and writers, Vertigo comics do not have a consistent “house style” of art. Cover designs of early Vertigo series feature a specific vertical bar along the left side which included the imprint logo, pricing, date, and issue numbers. Issues cover-dated July 2002 premiered a new across-the-top layout that was designed to be used on all Vertigo books except the hardcovers, trade paperbacks, and graphic novels.