Join us 7–16 October, 2022 for our upcoming virtual antiquarian book fair!
Preregister now for Biblio.live and get $10 to use at the fair.
Home Rare Books Antique & Collectible Books More rare books from Cedar Tree Antiques THE WORKS OF MR. WILLIAM SHAKESPEAR IN SIX VOLUMES: ADORN'D WITH CUTS 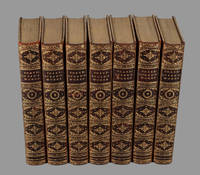 THE WORKS OF MR. WILLIAM SHAKESPEAR IN SIX VOLUMES: ADORN'D WITH CUTS

THE WORKS OF MR. WILLIAM SHAKESPEAR IN SIX VOLUMES: ADORN'D WITH CUTS

London: Jacob Tonson & Edmund Curl, 1709. Hardcover. Very Good+/No Jacket. 8vo - over 7¾ - 9¾" tall. THE WORKS OF MR. WILLIAM SHAKESPEAR IN SIX VOLUMES: ADORN'D WITH CUTS was published in 1709 by Jacob Tonson & edited by Nicholas Rowe. They are the 1st edition of Shakespeare's plays published after the four folios. These are the first illustrated edition of Shakespeare's plays, 1st edition to indicate acts, scenes & dramatis personae, 1st to provide stage directions, 1st to include a formal biography of Shakespeare. Also includes THE WORKS OF MR. WILLIAM SHAKESPEAR. VOLUME THE SEVENTH. CONTAINING VENUS & ADONIS, TARQUIN & LUCRECE AND HIS MISCELLANY POEMS published in 1710 by Edmund Curll. "The significance of the 'volume the seventh' as has been generally understood, is in the fact that the book was intended as a supplementary volume to be sold to purchasers of the set of Rowe's Works of Shakespeare" (Alden, 1916). This octavo set is bound in full calf, with gilt & blind tooled covers, gilt tooled spines with five raised bands, gilt titles to spines. Frontispiece & plates present all volumes. The text block (19 cm) is laid paper. Endpapers are wove, indicating the set was bound after 1759. An owner's inscription on volume 5's title page reads "ex libris Georgii Trenthas(?) Talbot". The 14th Earl of Shrewsbury (George Talbot 1719-1787), lived about the same time these volumes were bound. The father of the Earl (George Talbot 1675-1733) died before these volumes were bound, given the use of wove paper. It seems likely that this set was owned by the 14th Earl. CONDITION - In all seven volumes there are no missing pages, no page tears, corners not bumped, hinges are sound, binding is tight. Calf on all boards in fine condition. Top & bottom edges of spines rubbed. Light toning throughout. No markings at all except as noted below in Vol 1 & 5. Vol 1: old bookseller's price in pencil on front pastedown & ink gift inscription on free front endpaper. Vol 2: occasional foxing. Vol 3: small scuff to spine, small stain pg. 1087, some foxing. Vol 4: 3/8" worming bottom of front hinge, ¼" spots pp. 1561-1562, some foxing. Vol 5: title page has ink in old hand "ex libris Georgii Trenthas(?) Talbot" . Plate facing Hamlet Play Title page has been hand-colored. Small scuff to spine, ¼" stain pp. 2182 & 2183, small ink stain on fore-edge of pp. 2383-2391 doesn't affect text, areas of foxing pg 2573 & 2641-2647. Vol 6: foxing on pp. 2661, 3771, 3185. Vol 7: worming like Vol 4, stain in dedication pages, some foxing. Overall a gorgeous set in very good condition. DISTINGUISHING POINTS: Vol.1-5 are first editions, conforming to ESTC T138294 for signatures, pagination & plates, and to Ford's "Shakespeare, 1700-1740" first issue criteria regarding collation & pagination errors. Vol. 6 conforms to ESTC T138297 & to Ford's Second Issue criteria. ESTC T138297 refers to this edition as a 'lineatim reprint (possibly surreptitious) of the ESTC T138294 edition of the same year'. However, UCLA Clark rare book library states "H.L. Ford in 'Shakespeare 1700-1740', Oxford, 1935, claims that there were 2 printings of Tonson's 1709 ed. However, a comparison of sets of this ed. with Ford's distinguishing points of the 2 printings reveals that each set is composed of sheets from both printings, and that in many cases individual vols. are also composed of sheets from both printings. Possibly the printings were not discrete." Vol. 7 (Poems) is described in ESTC T138298 as "Intended to accompany the 6v. Rowe edition of 1709." It conforms to ESTC T138298, which states: "Editor's dedication signed: S.N. The 'critical remarks' and 'An essay' are by Charles Gildon." Vol. 7 contains the same Dedication by Charles Gildon. According to Alden, "There has been considerable uncertainty as to the editor of the volume, some authorities referring it to Charles Gildon, known to be the author of the essays it contains, others to a mysterious 'S. N.,' because in some copies those initials are attached to the Dedication.".

30 day return guarantee, with full refund including original shipping costs for up to 30 days after delivery if an item arrives misdescribed or damaged.

Seller rating:
This seller has earned a 5 of 5 Stars rating from Biblio customers.
Biblio member since 2022
UPLAND, California
Ask Seller a Question

Cedar Tree Antiques has been selling art, antiques and books since 1992, throughout Southern California.

edges
The collective of the top, fore and bottom edges of the text block of the book, being that part of the edges of the pages of a... [More]
fine
A book in fine condition exhibits no flaws. A fine condition book closely approaches As New condition, but may lack the... [More]
hinge
The portion of the book closest to the spine that allows the book to be opened and closed.
tight
Used to mean that the binding of a book has not been overly loosened by frequent use.
text block
Most simply the inside pages of a book. More precisely, the block of paper formed by the cut and stacked pages of a book.... [More]
plate
Full page illustration or photograph. Plates are printed separately from the text of the book, and bound in at production. I.e.,... [More]
jacket
Sometimes used as another term for dust jacket, a protective and often decorative wrapper, usually made of paper which wraps... [More]
spine
The outer portion of a book which covers the actual binding. The spine usually faces outward when a book is placed on a shelf.... [More]
calf
Calf or calf hide is a common form of leather binding. Calf binding is naturally a light brown but there are ways to treat the... [More]
octavo
Another of the terms referring to page or book size, octavo refers to a standard printer's sheet folded four times, producing... [More]
gilt
The decorative application of gold or gold coloring to a portion of a book on the spine, edges of the text block, or an inlay in... [More]
title page
A page at the front of a book which may contain the title of the book, any subtitles, the authors, contributors, editors, the... [More]
raised band(s)
Raised bands refer to the ridges that protrude slightly from the spine on leather bound books. The bands are created in the... [More]
reprint
Any printing of a book which follows the original edition. By definition, a reprint is not a first edition.

Bern Marcowitz warns against paperclips and other inappropriate page-savers, and offers a bit of advice on using and collecting bookmarks.

Collecting History of the Circus in America

Step right up! Take a look at the center ring, where you will see displayed the most amazing, most colorful series of history books that the world has ever seen! Right this way, folks…